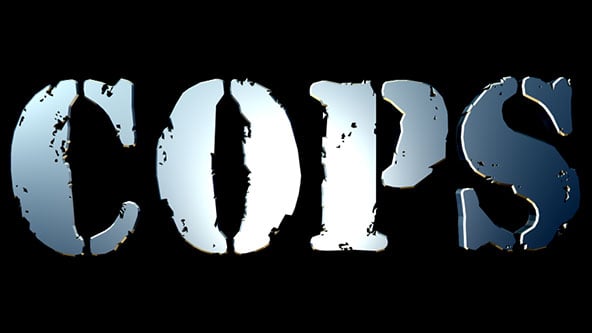 COPS is produced by Langley Productions and new episodes are available on Fox Nation .

For its first 25 seasons, COPS was broadcast on the FOX Network. Subsequently, COPS aired on The Paramount Network for seven years (2013-2020). Episodes from earlier seasons are syndicated on numerous other networks.

COPS has followed officers in 140 different cities in the United States and in Hong Kong, London, and the former Soviet Union. Each episode is approximately 22 minutes in length and typically consists of three segments, with each segment being one or two self-contained police incidents.

COPS follows police officers, constables, and sheriff’s deputies during patrols and various police activities by embedding camera crews with their units. The show’s formula adheres to a classic Cinéma vérité ethos. With no narration or scripted dialog, it depends entirely on the commentary of the officers and on the actions of the people with whom they come into contact.

COPS is an American documentary television series that follows police officers, constables, and sheriff’s deputies during patrols and other police activities. It is one of the longest-running television programs in the United States and the second longest-running show on FOX. Created by John Langley and Malcolm Barbour, it premiered on Saturday, March 11, 1989.

COPS presents a wild look at law enforcement officers in another country, on location with Russian police, filmed in Moscow and Leningrad over the course of 16 days using six camera crews.

Patrolling with Scotland Yard’s Metropolitan Police of London (Part 1 of 2). Included: the arrest of a man who allegedly hit his mother; training for riot control; airport security for visiting dignitaries.

COPS (Florida & Texas) Celebrating the beginning of its 23rd Season along with its 800th episode.

“COPS” debuts its 26th Season on its new home, Spike TV. One of the longest-running series in television history, “COPS” kept its long-held Saturday night timeslot at 8PM ET/PT.

Live Special Episode:  Celebrating 1,000 episodes with a Special packed with fan-favorite clips from the show, as well as a reunion with officers and the suspects they busted. Hosted by Terry Crews.